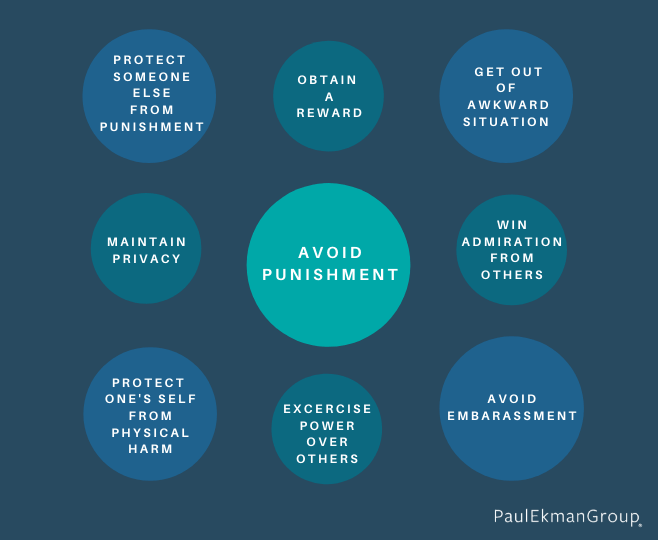 Reading between the lies

Why do people lie? Such a simple question should come with a simple answer (but doesn’t, unfortunately). There are indications, however, that most of us share the same the motives for telling lies.

How to tell if someone is lying

My data collected during interviews with children and from questionnaires completed by adults suggests that telling lies occurs (at least in part) for one of nine reasons:

1. To avoid being punished. This is the most frequently mentioned motivation for telling lies (by both children and adults). It’s important to note that there were no significant differences for lies told to avoid punishment for a purposeful misdeed versus an honest mistake.

2. To obtain a reward not otherwise readily obtainable. This is the second most commonly mentioned motive, by both children and adults. An example of this is falsely claiming work experience during a job interview to increase chances of hire.

3. To protect another person from being punished. As with lying to avoid personal punishment, motive does not change with intent. We’ve seen this occur between coworkers, friends, family, and even with strangers!

4. To protect oneself from the threat of physical harm. This is different from being punished, for the threat of harm is not for a misdeed. An example would be a child who is home alone telling a stranger at the door that his father is asleep now and to come back later.

5. To win the admiration of others. Telling lies to increase your popularity can range from “little white lies” to enhance a story being told to creating an entirely new (fabricated) persona.

6. To get out of an awkward social situation. Examples of how telling lies can look when motivated by this are claiming to have a babysitter problem to get out of a dull party, or ending a telephone conversation by saying there is someone at the door.

7. To avoid embarrassment. The child who claims the wet seat resulted from water spilling, not from wetting her pants, is an example if the child did not fear punishment, only embarrassment.

8. To maintain privacy without notifying others of that intention. For example, the couple who claims to have eloped because the cost of a wedding was beyond their means when, in reality, they were avoiding the obligation to invite their families.

9. To exercise power over others by controlling the information the target has. Famously embodied by Hitler, this is arguably the most dangerous motive for telling lies.

I suspect there are motivations behind telling lies that fall outside one of the above nine categories, such as trivial deceits like lies told out of politeness or tact, which are not easily subsumed by these nine motives. However, these nine were presented in data I collected myself and can, at least, be used as the foundation to explain why people lie.

Want to know if you are being lied to?

While Dr. Ekman cautions that a single micro expression or flash of leakage does not offer conclusive proof of lying, micro expressions are one of the most effective nonverbal behaviors to monitor to indicate a person is being dishonest.

Students can receive a 25% discount on training tools by sending a current copy of their student ID to custserv@paulekman.com.