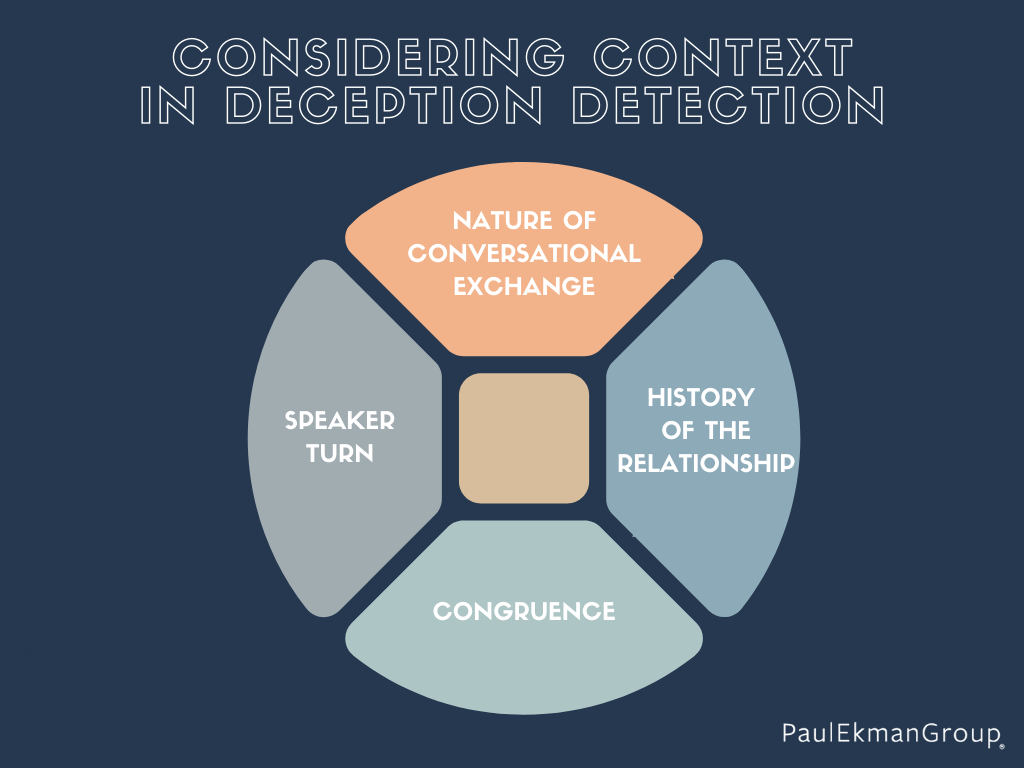 This is a good place to explain what I mean by context. The very same micro expression might have very different significance in different contexts.

The broadest meaning of context is the nature of the conversational exchange. Is it a first meeting, a casual conversation, a formal interview, an interrogation in which the other person knows that he or she is under suspicion of wrongdoing?

The second context is the history of the relationship. What has transpired previously in this conversation? What has been the nature of previous contacts between the person being evaluated and the evaluator? And what does each expect and want their future relationship to be?

The third context is speaker turn. Is the micro expression shown when the person being evaluated is speaking or listening?

While all four of these contextual issues must be considered when evaluating a normal facial expression, or macro expression, of an emotion, they can be especially revelatory when spotting a micro expression. They must also be considered when evaluating signs of emotion in the voice, in posture, and in other cognitively based clues to deceit in order to correctly learn how to detect lies.

Most people do not notice micro expressions when they occur during a conversation, when a micro is competing for attention with words, the tone of the voice, and gestures. They are also missed because we are often distracted by thinking about what to say next rather than closely watching for a person’s micro expressions. Even when I have shown people micro expressions out of context–with the sound turned off, and with no need to think of replies–most untrained people do not report seeing many of them. Because we aren’t very good at observing micro expressions on our own, when I first tried to teach people how to spot micros, I was surprised by how quickly they learned. With even just an hour of instruction, people are able to significantly improve their ability to spot micro expressions. I believe the essential elements that allow them to learn so quickly are immediate feedback about whether they are correct in their judgment, repeated practice, and visually contrasting the expressions most often confused with each other, specifically anger with disgust and fear with surprise.