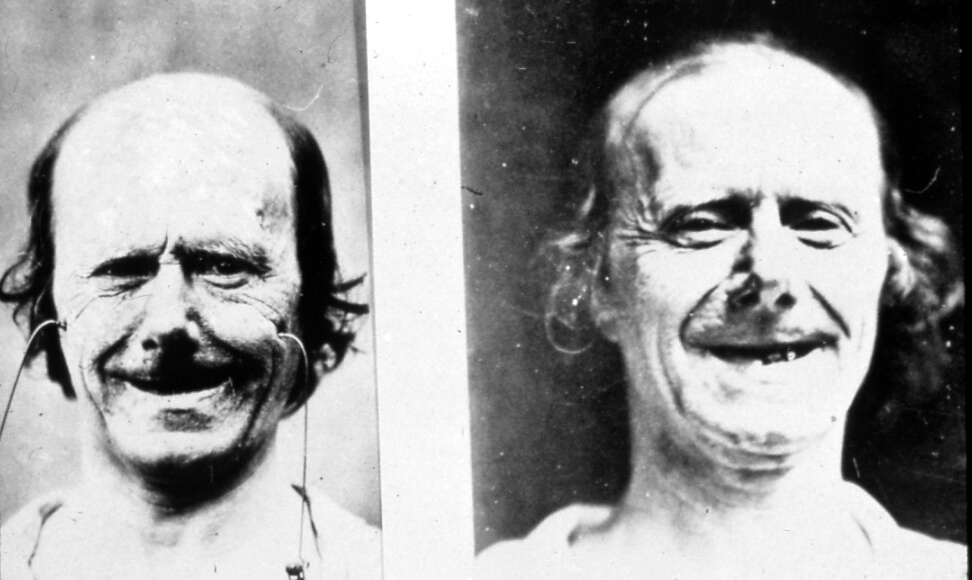 What is the meaning of the smile? Recent research has shown that there are many types of smiles, and that one type of smile — the enjoyment smile — seems to be associated with positive emotion, whereas other types of smiles are not.

The facial expression commonly referred to as “a smile” is, in fact, not a singular category of facial behavior. As far back as 1862, French anatomist G. B. Duchenne noted that the orbicularis oculi muscle, which surrounds the eye, is recruited in smiles that occur with spontaneously experienced enjoyment but not in smiles that are posed.

Only in the last few decades have researchers gathered the empirical evidence to confirm Duchenne’s observation. This particular configuration of the enjoyment smile identified by Duchenne–the orbicularis oculi with zygomatic major–has been called the Duchenne smile in honor of Duchenne’s original observation.

Why would enjoyment smiles differ at all from other smiles? The differences between enjoyment and other smiles originate in functional neuroanatomy. It appears that there are two distinct neural pathways that mediate facial expressions; one pathway is for voluntary, willful facial actions, and a second for involuntary, emotional facial actions. The voluntary facial movements originate in the brain’s cortical motor strip and arrive at the face via the pyramidal motor system. Involuntary facial movements, like those involved in an emotional expression, mainly arise from subcortical nuclei and arrive at the face via the extrapyramidal motor system.

How to tell an enjoyment smile is genuine

Now, the most reliable marker of the enjoyment smile is the Duchenne marker. FACS research has shown that in a true enjoyment smile, the skin above and below the eye is pulled in towards the eyeball, and this makes for the following changes in appearance: the cheeks are pulled up; the skin below the eye may bag or bulge; the lower eyelid moves up; crows feet wrinkles may appear at the outer corner of the eye socket; the skin above the eye is pulled slightly down and inwards; and the eyebrows move down very slightly. A non-enjoyment smile, in contrast, features the same movement of the lip corners as the enjoyment smile but does not involve the changes due to the muscles around the eyes.

In a smile, the absence of movement in the outer part of the muscle that orbits the eye (orbicularis oculi pars lateralis, in Latin or AU 6 in FACS terms) distinguishes a fabricated smile from the genuine thing. If the smile is slight or moderate in scope, it is easy to spot the absence of this movement because there are no crow’s feet present and the cheeks are not raised by the muscle’s action, which narrows the eye aperture. On the other hand, deliberately made broad smile will produce all these signs, making it more difficult to spot fabrication, so you must look for a much more subtle clue: a very slight lowering of the eyebrows and the skin between the eyebrow and the upper eyelid, which is called the eye cover fold. This difference is difficult to recognize, and most of the time we are easily fooled by broad smiles that are fabrication, which might also explain why it is such a common mask.

Cultural anthropologists also observed that humans from different cultures smile in situations involving both negative and positive emotion — further buttressing the conclusions of the experimental psychologists…These anthropologists concluded that the meaning of the smile was culturally determined, that generally speaking, there were no universal facial expressions of emotion, and in particular, there were no facial expressions of enjoyment. However, because the aforementioned psychologists and anthropologists did not make the distinction between smiles which feature just the zygomatic major and smiles which feature both the zygomatic major and the orbicularis oculi, they could neither support nor disconfirm Duchenne’s original observations. However, with our current understanding of the differences between enjoyment and non-enjoyment smiles (or genuine and fake smiles), it becomes clear that smiles can be both culturally specific as well as a universal signal of enjoyment.